The West vs. Sharpton Debate in Historical Context 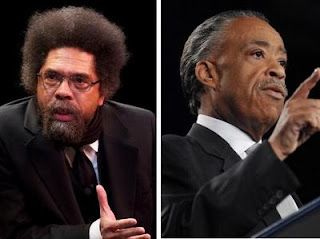 Quite a few folks are writing and tweeting about a recent debate…or rather, an argument, on MSNBC between Al Sharpton and Cornel West about what Barack Obama’s commitment to black people should be.

See, for instance, Black People Not Agreeing by Ta-Nehisi Coates, Sharpton and West's MSNBC Shouting Match by Jenée Desmond-Harrison on TheRoot, and Al Sharpton: Obama's Go-To Black Leader by Wayne Barrett, to name just a few of the many, many articles on this recent debate.

Among other things, I viewed the Sharpton vs. West showdown in the context of a long line of intellectual and literary disagreements that have taken place primarily between black men.

Now, many of those debates and disagreements took place on the pages of magazines and in books. In the case of Washington and DuBois, their articles appeared in The Atlantic magazine and led to DuBois's well known The Souls of Black Folk. Hughes, responding to an essay by Schuyler, wrote “The Negro Artist and the Racial Mountain,” which remains one of the most well-known essays in African American literary discourse.

Tolson and Hayden had a strong difference of opinions at a writers conference at Fisk University, and the disagreement became widely known when a report of their exchange was printed in Negro Digest/Black World. The issues raised in their debate about artists as black poets or poets who are black was key in the development of black arts discourse.

It’s worth noting that sometimes one or both of the rivals benefited from the debate. For instance, Baker and Gates had some lengthy exchanges and debates about the directions of African American literary study. Their disagreements made it possible for them to produce some lengthy writings in high profile venues, and I think it’s no coincidence that they became two of the most widely known African American literary critics of the modern era.

Obama's response to his former pastor Jeremiah Wright provided him an opportunity to produce his famous "speech about race."

All of the debates (or what might be viewed as strong rebuttals) have had important influences on the shape of the field of African American literary critical discourse or black studies discourse in general. They have also helped shaped conversations about race.

We could add Jalen Rose and Grant Hill as a footnote. And, if we wanted to broaden things to music, we could add the practices of "battling" in both jazz and rap.

It’s hard and perhaps too early to say how important the Sharpton vs. West debate will be in the years and decades to come. But we can note a few things:

1. The intensity of their debate will make some people uncomfortable.
2. The intensity of the argument over issues like black leadership and allegiances to black community means those issues are still worth arguing over.
3. Both Sharpton and West will stand to benefit by this kind of exchange. It will, in the language of political campaigns, help "fire up the bases" for both men.
4. The debate continues the legacy of focusing primarily on two, verbally skilled black men.

Speaking of which, the Sharpton vs. West debate was also a reminder of how vital certain kinds of black verbal skills are for black men in the public sector. Malcolm, King, Baker, Gates, Obama, Sharpton, and West have definitely been praised and gained increased attention based on their oratorical gifts.

It's also necessary to point out the absence of black women in these debates. Aside from Zora Neale Hurston, for instance, who exchanged negative reviews of works with Richard Wright, black women are less visible in those public debates. I imagine we can think of many reasons why, right?

Anyway, given the writings about Sharpton vs. West, I thought it was important to mention some of the larger historical context involving intellectual debates between black men and black men.
Posted by H. Rambsy at 7:22 PM