Literary Scholar as Photographer, Chronicler: The Case of Dr. D.A.S.H. 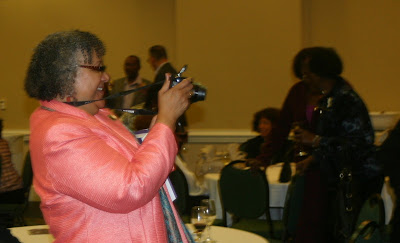 Donna Akiba Sullivan Harper - sometimes known as Professor Harper, and sometimes known (by the hip young'ins) as Dr. D.A.S.H. - is about 12% human while the other 88% of who she is consists of scholarly-creative-motivating force. She's a literature professor at Spelman, the Fuller E. Callaway Professor in fact.

Beyond researching, teaching, and writing about her main man Langston Hughes and African American literature in general, Dr. D.A.S.H. chronicles the cultural histories of African American scholarly and literary communities.

At the recent College Language Association (CLA) conference in South Carolina, Professor Harper was busy participating and documenting the activities. One second, she was leading a meeting for professors at HBCUs, and in another second, she was taking photographs of that same meeting.

Dr. D.A.S.H. and I are friends on facebook, so I was pleased to see that she's already posted more than 100 photographs from the conference in an album on her page. Impressively, she has even provided captions for each of the images.

The 100-plus images are good, but the inclusion of captions for those images is really something special. The kind of dedication that would push someone to add that level of detail confirms for me that Dr. D.A.S.H is doing more than simply taking photographs. She's doing that, but she's also participating in a labor of love.

The CLA annual conference will take place in Atlanta, Georgia next year. Spelman College is serving as the host institution. In a way then, Professor Harper's images serve as a vibrant early preview of the kind of activity that takes place at the conference.

More than that though, I was thinking that the images provide a view of some broader possibilities for what it means to be literary scholars. On the one hand, literary scholars can be those groups of people interacting with each other, sharing ideas, and wearing fashionable clothes. At the same time, a literary scholar can be a Dr. D.A.S.H. photographing and chronicling the activities of researchers, teachers, poets, and active listeners.
Posted by H. Rambsy at 11:35 AM