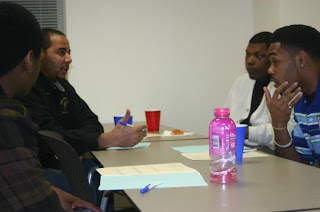 Over the course of about 5 years now, my friend and colleague Kim Poteet and I have been having a wide-ranging discussion about the distinct challenges facing collegiate black men. We talked about various other issues, of course, but the question of how to think about and address the struggles facing black men on our campus has come up frequently.

Kim and I recently decided to expand our conversation. So on the evening of March 1st, we organized a focus group discussion for black men at the university, where we tried to identify some of the problems. Why, for instance, does SIUE seem to lose a disproportionate number of black men before they graduate?

More than 20 collegiate black men showed up for the meeting, and we had a lively, extended conversation. The guys accomplished the goal of beginning to identify some of the problems that they and their black male peers are confronting in terms of academic performance. They listed things like lack of preparation in high school, culture shock, inadequate support systems, mismanaged priorities, and many other issues.

The meeting was productive and gave us a solid foundation to continue building.
Posted by H. Rambsy at 11:00 AM