Allison Joseph's Presence Among our 100 books 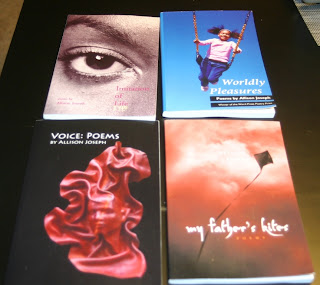 Black Studies @ SIUE has a collection of about 100 volumes of poetry published between 2011, and among those books, Allison Joseph's work is well-represented. And why not? She's a really gifted and prolific writer.

Allison is right down the street, so to speak, at SIU-Carbondale. Her closeness to us has given us an even greater sense of purpose in making sure we always represent with her works. Emily Phillips and I have written about Allison perhaps more than we have with any other writer represented in our collection.

She's the kind of poet who draws you in. Just the other day, I was re-reading Allison's expansive sequence of 34 sonnets in my father's kites. It's a really fascinating project, in part because she typically doesn't write sonnets. But the sonnets are also intriguing because of the subject - her father and his death.

Well, it's more than that. It's about her father, his death, the funeral preparations, music, memory, family secrets revealed, and so much more. Allison Joseph rightly takes up space in our collection.