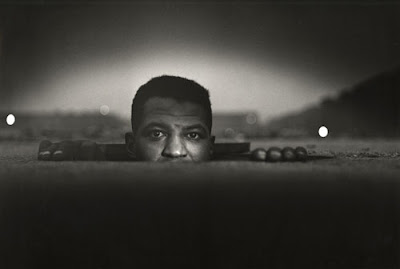 Photograph by Gordon Parks, inspired by Ralph Ellison's Invisible Man.
"Where did all the black men go?" That's the question I've been posing to some of my friends and colleagues here at SIUE.

After looking over the most recent edition of the university's Factbook, which provides statistics about the university, I noticed a relatively significant drop in black male faculty members. In the fall of 2009, there were 21 of us. In the fall of 2010, there were 15. That 28.6% decline is notable, especially when we consider that black men make up such a small proportion of the total faculty.

How small? Well, there are 877 total faculty members, which means we - black men - now constitute about 1.7% of the professors at the university.

If it's true that college students are less inspired to pursue advanced degrees or become college professors when they do not see people who look like them in faculty positions, then we're in trouble.

Given those numbers, it's perhaps unrealistic to expect any major additions in the ranks of black men faculty. The trends, in fact, suggest that our numbers will continue to decrease.

Overall, SIUE saw decreases among other racial and ethnic groups of faculty as well. The recession has clearly had an effect on our university's ability to make new hires.  For instance, there were 47 new hires in 2009, and 26 new hires in 2010.  There were also numbers of faculty who left.

Still, the seeming disappearance of black male faculty was particularly notable among all the groups that saw declines. I'm not sure if folks around campus have been discussing the changes and what it might mean for us as a university.  Of course, for some it is a touchy subject.

For instance, try asking a professor who's served on a hiring committee or a departmental chair why they have so few or no black men in their unit, and they will likely respond with a version of the following, "well, we have tried to recruit black men and women, but they don't apply here. Or, if they do apply and interview here and we make them an offer, they end up going somewhere because another place gave them a higher salary."

Ok, fair enough. Still, there's a kind of defensiveness, or particular certainty and lack of curiosity with that kind of familiar response that has helped create tensions and distance between black people and non-black people here at SIUE and really at universities across the country.

Finally, these shifts are fascinating when placed in the context of national conversations about race. Remember two years ago with the ascent of Barack Obama, there was a conversation about us living in a post-racial society? Folks wondered out loud and in public about how things related to race would be different. It was really optimistic.  You do remember, don't you?

Well, interestingly, when I first looked over those numbers in our recent factbook, I wondered if I was witnessing a different kind of post-racial world at the university, a situation where black male professors were steadily and mysteriously vanishing.

I think we need to have honest discussions about the atmosphere that exists here at SIUE and what is really being done to create community and welcome faculty of color! This is a brave and brilliant step in that direction!

Amen. It seems as though that particular conversation is one that, at the onset, causes a certain amount of anxiety for all of the conversation's participants. For instance, when one asks about the potentiality of thinking about considering the idea of finding black male candidates, one may witness different kinds of reactions. One reaction is idignation, which manifests itself in phrases like "I don't even see color," or "I don't believe in identity politics." Then another reaction is "yes, but we just can't find any qualified black candidates." The first reaction is interesting because it reveals a certain privilege that comes with not having to see color or be reminded daily of one's identity. The second reaction is also intriguing because, as scholars, we pride ourselves on the ability to find what no one else has found. We can chase down the most obscure documents and facts, but when it comes to black American men, we have troubles. Then, of course, there is the institutional response, which is typically we can't afford these candidates or we can't within the bounds of the law seek them out. Universities are venues of creativity and have funny ways of making space for new programs and such, but in some ways universities seem to remain stagnant in finding creative ways to attract and keep black male faculty. Finally, there is "diversity," which ostensibly is a good concept. In practice, though, I wonder if diversity is antagonistic to blackness--particularly black maleness. That, however, is another conversation. In the end, the problem that you discuss is one that needs immediate attention if we care about the "universal" knowledge that universities purport to foster.

I also think trying to shape SIUE into a conventional university that values publishing over teaching and community is seriously problematic for attracting black faculty. Mainly because many faculty are willing to give up the big salary in order to serve students and community. Black faculty who place publishing above these two will not come to SIUE. So, what happens when we have a low salary AND low value placed on community?

The thought alone of openly discussing this excites me. As you mentioned Prof., the uneasiness of speaking out about these things is part of the problem in the first place. Race conversations are so taboo. Even at the MLK Ceremony and other BHM events, you can hear university leaders tread lightly as they discuss topics of diversity or inclusion. Filled with vague, cliches and catch phrases, I rarely hear these type of employment numbers mentioned.

Students definitely notice this too. Especially my classmates in the school of business. There is exactly 1 black male (that I know of) faculty member and 0 black professors.

I think Prof. H and Prof. Bradley, could probably attest to the fact that most Black students (incoming freshman, namely) plan to major in business... but why doesn't the faculty reflect the make-up of the student body?