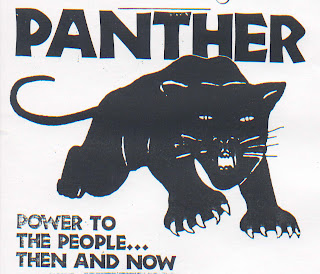 In chapter 3, Coates discusses his father's experiences as a panther

Next fall when I introduce chapter 3 of The Beautiful Struggle to the young brothers in our program, I’ll ask them to consider the amount of listening and research that Ta-Nehisi Coates had to do in order to produce such a thoughtful and engaging narrative about his father.

He writes about his father in a personal way, but he also situates his dad in the larger context of notable historical moments, including the activism of the Black Panther Party for Self-Defense. He also writes about how his dad had discovered Richard Wright’s Black Boy, and from Wright, his father “learned that there was an entire shadow canon, a tradition of writers who grabbed the pen, not out of leisure but to break the chain. He bubbled on the edge of Consciousness.”

An entire shadow canon. Writers grabbing pens to break the chain. The edge of Consciousness.

You gotta give it to Coates on his ability to pack some big provocative ideas into such a small amount of space. It’s also wonderful and rare to witness a son writing about the intellectual development of his father in that way.

If you can think of a black man who writes as powerfully about his father as Coates does, please let me know. I’d love to find complementary pieces of literature for what we're seeing in The Beautiful Struggle.

Anyway, what did you think about the biographical and intellectual sketches that Coates draws of his father?

Toward the end of the chapter, Coates turns his attention to that moment when that new black music and its accompanying slang began to come into his life. It’s here at the end of the chapter where Coates describes his intricate processes of investigating the “noise” coming out of New York and how he began to “pull something from the literature.”

I'm curious on how folks are thinking about how Coates writes about the music. Also, what else should we be getting our folks to consider with this chapter?

Late I am, but anyhow...Chapter 3 really breaks down how Knowledge and Consciousness go hand in hand. I don't want to say I "like" how he threw in his father's influences, but YEAH Richard Wright, James Baldwin, Malcolm X...it is interesting as "Tana" develops as well as the story that despite ALL that firsthand knowledge with both of his parents being very active and involved with the Black Panther Party - that his "knowledge" doesn't build until he starts hearing it in Hip Hop. As he stated on p. 93 "that our Knowledge of Self be more than America...Consciousness was a beginning" and he really goes into more detail in ch. 4. I also liked how he really introduced his mother's role and her complexity...I just found her very relatable to myself in some ways. Uhm, there are probably a few things I'm overlooking, but I read 3 chapters straight so I'll end here. Hope to hear back!