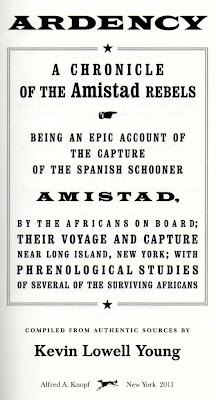 The title page for Ardency, presented above, alludes to the title page of A History of the Amistad Captives (1840) by John Warner Barber.

The full title for Barber's book was as follows: A History of the Amistad Captives: Being a Circumstantial Account of the Capture of the Spanish Schooner Amistad, by the Africans on Board; Their Voyage, and Capture Near Long Island, New York; with Biographical Sketches of Each of the Surviving Africans.

Like Barber's book, Ardency, too, was "compiled from authentic sources." Young's title page reflects an interest on the part of him and his publisher Knopf to further align this book of poetry with a historical work as well.

The reference to getting into the heads of the figures is also fitting, though, given Young's use of persona poems, where he must speculate and write about what James Covey, Cinqué, and the other figures were thinking.


Related:
Multi-threaded Comments on Kevin Young’s Ardency
Posted by H. Rambsy at 11:50 AM