The Contemporary Poet as Historical Researcher 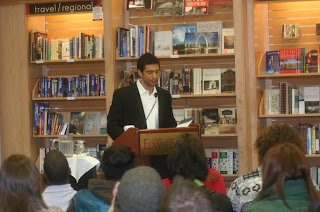 It's been cool checking out Adrian's work on Johnson and folks from the former heavyweight champion's life. In addition to writing in the first-person voice of Johnson, Adrian has poems in the voices of Johnson's former wives and girlfriends. Getting the specifics related to the different people together has required quite a bit of research on Adrian's part.

A few years ago, when I'd stop by his office, I recall checking out the stacks of historical books on Adrian's desk and book shelf. He was constantly following a lead and trying to get more information on figures in Johnson's life--his family, his friends, his love interests, his opponents.

At that time, Adrian would just mention writing "a book about Jack Johnson." The stacks of books on his desk and the nature of his conversations made Adrian the poet indistinguishable from Adrian the researcher. Adrian is actually one of many contemporary poets going really far on the research tip in order to produce a volume of poetry.

In his volume Leadbelly (2005), Tyehimba Jess writes in the voice of the musician Huddie "Leadbelly" Ledbetter as well as more than 20 other figures from his life. Jess's book was clearly the result of close attention to historical records. Marilyn Nelson's book Carver (2001) about George Washington Carver also reveals a poet who relied on historical research. The same can be said of Frank X Walker's Buffalo Dance: The Journey of York (2004), A. Van Jordan's M-A-C-N-O-L-I-A (2004), and Quraysh Ali Lansana's They Shall Run: Harriet Tubman Poems (2004), to name a few.

Poet Honorée Fanonne Jeffers is currently pursuing research in order to produce a book on Phillis Wheatley. I've read some kwansabas by Treasure Williams on Fannie Lou Hamer that are drawn from years studying Hamer.

During his reading on Thursday night, Adrian finished a poem and started explaining this particular moment from documentary footage of a Johnson fight. At that moment, I realized that clearly the researcher Adrian had gotten slightly envious that the poet Adrian was getting all the shine and so decided to intervene and remind the audience who did all the background work to make the poems possible.

Related:
Adrian Matejka to Jack Johnson: "You're worthy of poems"
Treasure Williams on Fannie Lou Hamer on Facebook
What Will Black Writing Be?
Posted by H. Rambsy at 8:30 AM