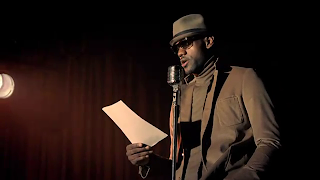 Back in the day, I became accustomed to seeing young black women perform dramatic readings of Maya Angelou's poems "Still I Rise" and "Phenomenal" at pageants, talents shows, and church events. The poems and different performances of Angelou's pieces had become quite familiar to me.

But this past week while watching an NBA game, I encountered a new, unexpected presentation of Angelou's work.

There's a moment in this Nike commercial entitled "Rise" featuring LeBron James, where the basketball star reads lines from Maya Angelou's "Still I Rise." The commercial shows James raising a number of questions such as "what should I do?," "should I admit that I've made mistakes?," "should I really believe I ruined my legacy?"His questions are apparent responses to the controversy related to his move from the Cleveland Cavaliers to the Miami Heat.

At one point, he asks, "should I read you a soulful poem," and the scene shows him at a microphone, accompanied by someone tapping on an African drum, you know, cooled out (black) poetry set vibe. James then reads, "...shoot me with your words / You may cut me with your eyes, / But still, like air, I'll rise."

On some levels, I suppose there are some resonant links between Angelou's poem (about continuing to rise even though adversaries attack you with words and negative looks) and James's plight these days. At some point, I'll try to talk more on the subject. For now, it just seemed worth pointing out the presence of Angelou's work in a Nike commercial featuring "King James."
Posted by H. Rambsy at 8:00 AM