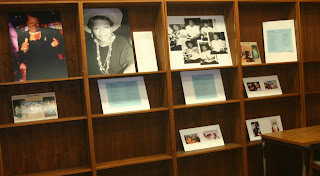 We had our first events in the Redmond Reading Room this past Thursday, so we’re still in the earliest stages of discovering what’s possible with the space.

We organized an audio-visual exhibit focused on Maya Angelou, Gwendolyn Brooks, Lucille Clifton, and Margaret Walker for two of my African American literature courses. The Redmond Room holds about 15 people at one time, which meant one of my classes had to be split into two. I had one set of students visit at 2 and another group at 2:30. Later, I met with one class from 3:30 to 4:45.

When the students showed up, I first provided a short introduction about Redmond and his photographic work. Next, students were free to move around the room listening to poems by the four poets on the mp3 audio devices. Select poems by the poets and photos of the writers by Redmond were positioned around the room.

Initially I was worried about what books to fill the shelves with on one side of the room, pictured above. However, for now, I like the idea that we can use all the space to showcase the larger panels we've made of Redmond's photos. The room is for reading books, but it's also true that the room will facilitate readings of a broad range of images.