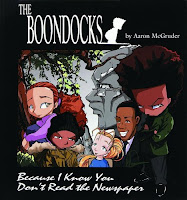 You've heard versions of the argument before. "The book's better than the movie." "The sequel wasn't as good." Versions of those sentiments emerge almost every-time there's discussion of Aaron McGruder's comic strip The Boondocks and his cartoon show of the same name.

I guess so much depends on preferences. It's also true that the show could be oft-putting in some ways--the cursing, the vivid images, the music, the over-the-top humor. No doubt, those same things could be reasons why folks prefer the cartoon over the comic strip.

McGruder ultimately had to choose between the comic strip and the cartoon. He felt he couldn't continue doing both effectively. So he chose to concentrate on the cartoon full-time and discontinue the comic strip.

I wish he could have kept the comic strip going as well, mainly because I felt that both versions of The Boondocks did important and different work. The comic strip offered these extended written discussions in daily newspapers about current topics, politics, black culture, and opposition to presidential authority. All of this on a consistent basis.

From my perspective, there's different and overlapping, high value in The Boondocks and The Boondocks. I'm not alone, I'm sure, in the value I find both the comic strip and the cartoon. Interestingly, I enjoy learning about why some people like one and not the other.

I'm fascinated by the fact that one of version of The Boondocks can affect the perception and responses to the other one.

If you have some thoughts on the show, the comic strip, or both, let me hear from you. I'm interested to get folks views.

Hey! Just wanted to say that I didn't know The Bonndocks was back on air.

I only watched the tv show sparingly. I was a big fan of the comic strip (it was always the first one I read on the comic page), but both are wonderful pieces of thought-provoking art.