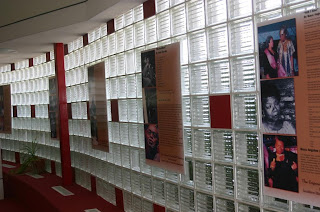 Earlier this week, I installed the first exhibit in our series The Black Poetry Mixed Media Project at the East St. Louis Public Library. The exhibit will remain on display for the next two weeks.

The photographs from our exhibit are drawn from the Eugene B. Redmond Collection, and given Redmond's longstanding commitments to East St. Louis, I'm especially excited about where we opened our project.

The series of display panels that we have up at the East St. Louis Public Library appear near the front of the library along a long glass panel. Our series now contains 7 panels and more than 20 images. The numbers of panels and images will grow over the next few months as we expand the exhibit.


(Funding for the exhibit was made possible by funds from the Illinois Humanities Council and the Black Studies Program @ SIUE).

Related content: Eugene B. Redmond and the EBR Collection
Posted by H. Rambsy at 8:03 AM