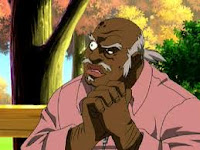 I was a big fan of Aaron McGruder's comic strip long before it became a cartoon. And I was disappointed when he decided to discontinue the strip. But I have to admit after watching various episodes of the show, especially like the most recent one, "The Color Ruckus," I understand very much why McGruder felt he could communicate his stories through cartoons in ways that he could not in the strip.

The cartoon allows him to tell an extended, uninterrupted narrative in ways that are unavailable to him in a comic strip, and the audio (voices and music) of the television program are integral to what he's conveying. While I miss the comic strip, I also acknowledge the extents to which this other form creates all other avenues for him.

The focus on Uncle Ruckus for this most recent episode revealed some of McGruder's flare for storytelling and for really remixing pop culture narratives, in this case Alice Walker's novel-turned-movie The Color Purple directed by Steven Spielberg. Scenes through "The Color Ruckus" continually alluded to Walker's/Spielberg's narrative. There's also some Benjamin Button thrown in.

A crucial shift had to do with a black boy (the young Uncle Ruckus) being the victim of Mister's harsh beatings, as opposed to a young black woman, Celie. A few different flashbacks highlighted a young Uncle Ruckus on the receiving end of his father's brutal violent streak. Uncle Ruckus's beatings reminded me of the violence against black boys depicted in Richard Wright's Black Boy, Robert Hayden's poem "The Whipping," and several other literary texts.

Usually, Uncle Ruckus's troubling ideologies and disturbing anti-black comments make him an easy figure to dislike, but his back-story, and those beatings for instance, created quite a bit of sympathy for him. The episode suggested that the disturbing character we're presented with is the product of a distinctly troubled past, a past connected to anti-black racism and familial abuse.

Related posts:
Huey and Riley (Double Consciousness)
Huey vs. Riley
Posted by H. Rambsy at 7:31 AM