Obama and the Economist 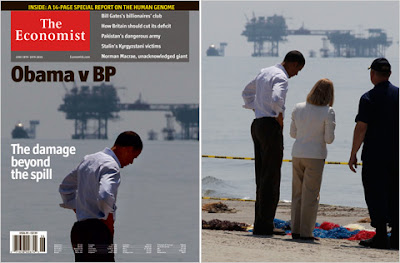 [The Economist image on left, the original Reuters on the right]

The Economist magazine, known for its provocative covers, presented an image of Obama on its June 19 cover. According to Jeremy Peters, The Economist image projects "the ideal metaphor for a politically troubled president" by showing Obama "standing alone on a Louisiana beach, head down, looking forlornly at the ground."

Turns out the initial image was different. Here's more from Peters::

The unaltered image, shot on May 28 by a Reuters photographer, Larry Downing, shows Adm. Thad W. Allen of the Coast Guard and Charlotte Randolph, a local parish president, standing alongside the president. But in the image that appeared on The Economist’s cover, Admiral Allen and Ms. Randolph had been scrubbed out, replaced by the blue water of the Gulf of Mexico.