Huey and Riley; Or King’s and McGruder’s Double Consciousness 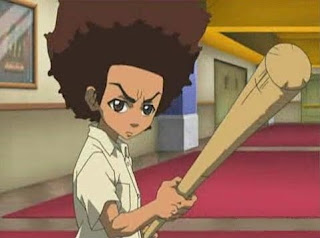 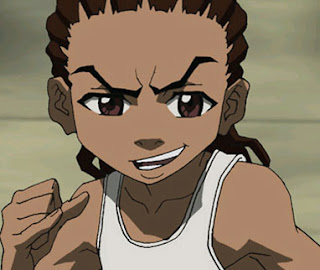 Back in the day, the scholar W. E. B. DuBois presented this concept double consciousness, a feeling of “two-ness,—an American, a Negro; two souls, two thoughts, two unreconciled strivings; two warring ideals in one dark body.” DuBois referred to the warring ideals associated with being black and American, but I’ve often considered the presence of warring ideals among black people and black people. [Oh, and I'm not referring to the problematic phrase "black-on-black crime."]

The Boondocks, and in particular Huey and Riley, have always added fuel to a kind of intra-racial double consciousness, given their apparent dual and dueling ideological positions. Both characters, not to mention the whole host of figures in the comic strip’s and cartoon’s universes, emerged from the mind of one Aaron McGruder, and the two brothers’ conflicts have served as a powerful muse for the creator, not to mention quite a bit of entertainment for us.

In the days of the comic strip when Huey was the undisputed center of attention, folks mused that Huey was a version of, or perhaps better, a mouthpiece for McGruder. Then with the show, we began to see Riley take on a much more major role, and he was seen as a kind over-the-top embodiment of what happens when keeping it way too real goes wrong. The verbal and physical arguments between Huey and Riley highlighted McGruder’s sense of these opposing, “unreconciled strivings” among kinfolk.

These opposing views “in one dark body” go even further when we consider that actress Regina King provides the voices for both Huey and Riley. When Riley and Huey are arguing, King is, in effect, arguing with herself. At one moment, she’s giving voice to a 10-year-old highly intelligent black radical, and in the next moment, she’s voicing the sentiments of a foul-mouthed, 8-year-old thug.

The young black men I talk to at the university about The Boondocks always mention how Huey is the more admirable character and Riley is the kind they encounter far more often in their daily lives. Admiring and being inspired by the notion of a Huey and yet feeling surrounded by so many Rileys perhaps have these ways of producing a kind of double consciousness effect for these young men at the college.