The Coverage of The Boondocks 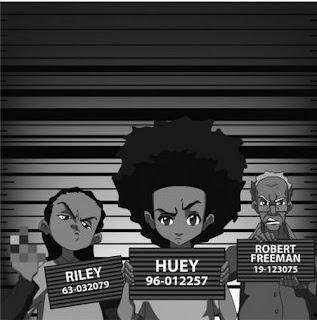 I sometimes have a hard time completing my goal of figuring out how folks feel about The Boondocks. Or better yet, I have a hard time coming to definite conclusions. The show is nearing the close of its third and likely final season, and you got all kind of responses.

A few weeks ago, Dwayne Betts wrote an entry on Ta-Nehisi Coates' blog focusing on Why I'm Disappointed with the Boondocks Final Season. Betts suggests that this season doesn't live up to McGruder's past work. Some commenters agreed.

Then, there's cultural critic Leonard Pierce, who's been reviewing each episode over at the A.V. Club. According to Pierce, this season of The Boondocks is "shaping up to be the show's strongest season." Each week, he rates episodes, and a vibrant discussion follows his review in the comments section.

Early in the season, Entertainment Weekly writer Ken Tucker generated dozens of comments with his article entitled Is 'The Boondocks' the best cartoon on TV right now? More recently, Andreas Hale went a little further with the question Is The Boondocks The Realest Show On Television?

This season of The Boondocks generated its most widespread coverage a couple of weeks ago with an episode that satirized Tyler Perry in particularly unflattering ways. The drama of a conflict between two well known black cultural figures drew quite a bit of attention. (So-called black-on-black conflicts are always bound to draw attention, right?) I suppose the conflict between a Perry and a McGruder is a small piece of some larger disagreements among sectors of black community--a subject that might be worth taking up more later.

For a take on McGruder's satire of Perry and other contemporary topics, check out Mekeisha Madden Toby's 'Boondocks' creator's shot at Tyler Perry stirs controversy.

Most of the coverage on The Boondocks is moderate to positive, with the most extensive not-so-positive critiques coming from fans or former fans who feel that the show is less impressive than its previous seasons or the comic strip. The folks who truly dislike The Boondocks, simply don't watch it, and they definitely don't spend time writing about the episodes.

When this season concludes in early August, I'll try to look around again and see how folks are summing things up.
Posted by H. Rambsy at 9:44 PM