A Richard Wright Sighting in Brooklyn 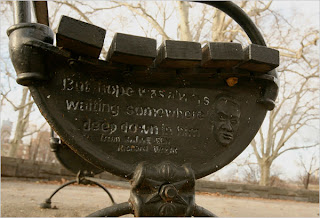 Came across an article yesterday about Brooklyn's Fort Greene as a literary hub in the Times, and the opening paragraph caught my attention.


Books have been born all over Brooklyn’s Fort Greene. Richard Wright labored over “Native Son” here while sitting on a hill in Fort Greene Park; a bench there now bears his name. He lived nearby, as did Marianne Moore, and several contemporary writers have roots in the neighborhood, including Colson Whitehead, Jhumpa Lahiri and Nelson George. For a tour of this literary hub (or to take the free workshops the New York Writers Coalition holds here to help people find their inner author), hop the subway to DeKalb Avenue or a nearby station. Bring pen and paper, in case the muse strikes.


Wright and Whitehead are, of course, two of my favorite authors. Their sensibilities as artists are quite different in many ways, but it's a cool fact that they occupied a common city-space, though separated by many decades.

The article made me aware of that Wright bench, which presents a sentence from Native Son: "But hope was always waiting somewhere deep down in him."
Posted by H. Rambsy at 9:21 AM