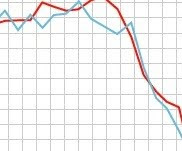 A couple of weeks ago, the Times ran an article At Colleges, Humanities Job Outlook Gets Bleaker noting that the job postings for all faculty positions in language and literature had declined "37 percent, the biggest drop since the group [MLA] began tracking its job listings 35 years ago." Last year, there was a 26 percent drop.

So, it's bad news for the field in general. But like with national trends, the outlook related to African American jobs is even worse.

As far as I could tell, there was no major discussion about what the dramatic decline in jobs in African American literature might mean to the field and broader profession in the near- and long-term. But then, the MLA has a relatively small number of black people, and the numbers of new and young folks in that mix are, well, even smaller.

My mind has been running all over the place concerning what we should be doing to address this problem of the apparent decreasing employment opportunities for African American literary scholars. In order to address and reverse these decreasing employment opportunities, we are going to need advocates and advocacy at multiple locations and with varying degrees of power and influence.

For now though, I guess those of us who care to think on the subject will really have to first raise awareness about the issue because it almost seems as if too many of us are oblivious to particulars of decreased employment opportunities in African American literature and more generally, the seriousness of black unemployment across the nation.
Posted by H. Rambsy at 9:18 AM