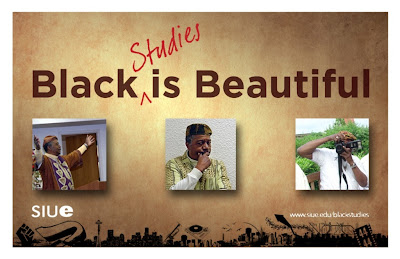 As a tie to our recent Maya Angelou exhibit in Lovejoy Library, we decided to feature our main man Professor Redmond on our most recent Black Studies postcards.

The first image, which I took in December of 2005, catches Redmond in action, opening the festivities at an arts events in East St. Louis. I took the second one in November 2004; Redmond had invited poet Sonia Sanchez to do a reading in his literature course here at SIUE. (Imagine that: you're a student in a class; the professor shows up and goes, "ok class, today, Sonia Sanchez will read her poetry for us.") The last one is from May 2004; Redmond and I were traveling in Nigeria.
Posted by H. Rambsy at 6:51 AM