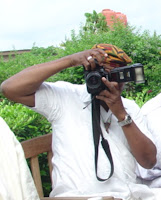 Years ago, I agreed with many scholars and other observers about the particular significance of Eugene Redmond’s contributions to the study of African American poetry. Most folks felt (and rightly so) that Redmond’s book Drumvoices: The Mission of Afro-American Poetry, a Critical History (1976) was his most notable achievement in the study of black verse. Redmond’s in-depth treatment of such a wide range of African American poets covering so many decades in the book is really remarkable.

But what about the consistent, alternative coverage of poets and various other artists that he’s provided since the publication of Drumvoices in 1976 up until now? How might the results of his tireless documentary work shift our views of his contributions?

Over the last thirty or so years, Redmond has taken more than 150,000 photographs of creative artists and supporters of the arts. He recently donated his materials to SIUE’s library, and once the Eugene B. Redmond (EBR) Collection is catalogued, organized, and made readily available to the public, it’s my contention that we’ll have to greatly expand our understanding of Redmond’s contributions to the study of African American poets.

With Drumvoices, Redmond provided an extensive literary history of black poetry. With his photography, he has produced one of the most tremendous efforts by a black writer to document the social, artistic, and political activities of poets, novelists, musicians, dancers, scholars, and filmmakers during the late 20th and early 21st centuries.

Now, it will certainly take some years to get the materials in the collection fully catalogued, but we’ll eventually have the opportunity to witness one of the most extraordinary visual records of American and African American literary and artistic activity. 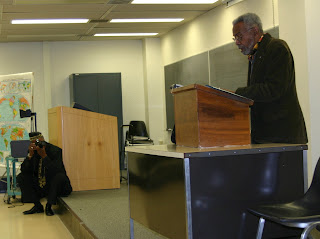 (Redmond photographing Amiri Baraka at SIUE, 2005).
Redmond's agreement to donate his materials to SIUE constitutes one of the university’s, and more generally, the region’s biggest victories. Those elite, private universities with the seemingly bottomless pocketbooks usually acquire the most coveted collections. But not this time.

In addition to the extensive photographing Redmond did during his travels across the country and in West Africa, what makes the collection especially important for the region relates to its outstanding documentation of local cultural activity. Sure, the collection features thousands of photographs of widely known poets such as Maya Angelou, Amiri Baraka, Jayne Cortez, Sonia Sanchez, Haki Madhubuti, Margaret Walker, and Gwendolyn Brooks, for instance, when they visited the region. Yet, the EBR Collection contains thousands of photographs and hundreds of flyers documenting years and years of readings and cultural gatherings in St. Louis, East St. Louis, Edwardsville, and the surrounding area.

If you’ve met Eugene Redmond, you know that he’s a fun and lively dude. But just a glance over the enormous body of materials comprising the EBR Collection reveals that 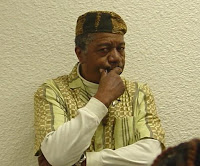 he’s taken visual documentation of literary and cultural activity quite seriously. It’s actually a lively seriousness. I’m looking forward to how we’ll apply that lively seriousness to our approaches making the collection available to folks in the region and beyond.

Related content: Eugene B. Redmond and the EBR Collection
Posted by H. Rambsy at 10:41 AM