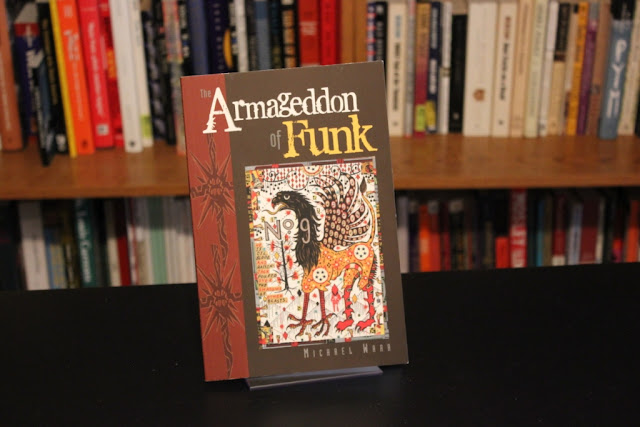 My review of Michael Warr's volume The Armageddon of Funk (2011) is now out in The Crisis magazine. That's good news because it'll bring attention to a really solid book. At the same time, now that the review is out, I feel freer to write about Warr's book here without jumping ahead of the print publication version.

Months ago when I first came across Warr's volume, I realized that he was one of those writers I had been wondering about who had somehow not received as much attention in part because of birth years and cultural factors. Black poets such as Amiri Baraka, Sonia Sanchez, June Jordan, and several others born during the 1930s and early 1940s became widely known given that they were at the right moments in their lives and careers during the heights of the black arts era. Generally speaking, writers born during the mid 1940s and through the 1950s received less widespread attention by comparison, in part because they did not have the equivalent of a black arts movement to assist in boosting attention focused on poetry.

There are clearly exceptions to the rule concerning poets born during the 1950s, most notably Rita Dove. But there were others, and Warr is one of them. We'd benefit by reading his poems. The Armageddon of Funk offers important time-specific chronicles of the world, including the volume's title poem where Warr reflects that as a 10-year-old in 1965, his only worry was "what will happen to / the world if James Brown dies?"


Warr's book also includes poems about his experiences while in Ethiopia and Mali. Reading  those poems by Warr reminded me that there was a time when Africa, or at least the idea of the continent, was a common topic for black poets. The absence of African American poems about Africa these days made Warr's works stand out even more to me.

Moving forward, I'll devote some blog entries to Warr's life and works. For folks new to his poetry, The Armageddon of Funk is a good place to start.
Posted by H. Rambsy at 9:25 AM

Howard thanks for more insightful words on "The Armageddon of Funk." The link you provide in the same post to your piece "Why the Birth Years of Black Poets Matters" does some of the initial homework for anyone wanting to look deeper into the relationship between black poets, what generational they landed in, and the impact of social movements. I think this is a multi-layered and complex question. I have many thoughts on the topic and where I fit in the equation as a poet and why. For now I hope to hear what others think about a hypothetical "lost generation" of black poets and who might fit in that category. (reposted by Michael Warr from armageddon of funk fan page)