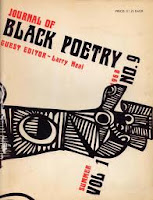 There's hardly enough discussion about the enduring ways that writers, editors, publishers, and even audiences associated with the black arts era collectively shaped the discourse concerning literary art by African Americans. Among other key features, black arts discourse solidified the notion of "black poetry." The designation of poetry by black people as black poetry was not an inevitable process; instead, it was the result of a combination of writing, publishing, evaluating, and reading activities.

American citizens who were previously referred to as "Negroes" and "Colored" began to increasingly refer to themselves as "Black" as the Civil Rights Movement picked up momentum during the mid 1950s and into the 1960s. Although writers referred to themselves as "Black," deliberate efforts would need to be made in order for us to arrive at the phrase "black writing." Hoyt Fuller, editor of Negro Digest magazine which became known as Black World magazine, was a central connector in the processes of linking "black" with "poetry."

Fuller facilitated a major national outlet that provided a platform for nationalist-minded poets who proudly referred to themselves as "Black," and just as important, Fuller initiated and encouraged a wide-ranging conversation among artists, editors, and scholars about a "black aesthetic" (distinct African American approaches to writing, publishing, and evaluating art). A similar facilitation of ideas and publication of many poems was taking place in The Journal of Black Poetry, Black Dialogue, and other periodicals. In addition, many poets such as Amiri Baraka, Sonia Sanchez, Larry Neal, and Dudley Randall, who promoted "black" issues in their works, accentuated views of their artistic creations as black poetry.

The numerous debates that took place during the late 1960s through the early 1970s among poets, commentators, and audiences -- what constituted "black poetry," what distinguished it from other poetry, and why it mattered -- further solidified the places of black poetry on the pages of literary history and in the minds of readers.  Students who were enrolled in newly formed Black Studies Programs in the early 1970s were interested in reading black poetry more than any other kind of poetry, and countless aspiring literary artists who sought to write poetry often sought to produce black poetry, even if there was no consensus on exactly what it was and was not.

Taken together, poets, editors, publishers, Black Studies Programs, general readers, and shifting social and cultural conditions all contributed to the production of what we now refer to as "black poetry."

Related:
• A Notebook on the Black Arts Era
Posted by H. Rambsy at 8:22 AM