Treasure Williams and the Arkansippi Effect 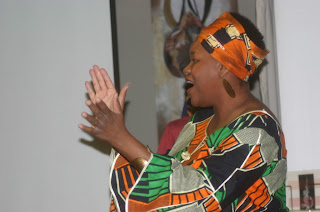 Treasure Williams reading Fannie Lou Hamer poems in St. Louis
Feb. 12, 2011.
Years ago, poet Eugene B. Redmond coined the term "Arkansippi" as a way of acknowledging the convergence of large numbers of black people from Arkansas and Mississippi to a common area: East St. Louis/St. Louis. Historical studies of migration typically concentrate on south to north or westward moves. Redmond's concept pays homage to moves from the South to the Midwest.

I was recently thinking about this Arkansippi idea when I reflected on Treasure Williams's reading last month in St. Louis. I realized that part of what distinguishes her performance style is her cultural identity and practices as a southern-born black poet.

Of course not all southern-born, black women poets read like Treasure. But Treasure's sound and approach have distinct connections to her upbringing in Mississippi.


Throughout her reading, which focused on her Fannie Lou Hamer poems, Treasure interspersed a few gospel tunes and spirituals into her performance. After reading her poem "october 16, 1917, montgomery county, mississippi," for instance, Treasure followed up with an excerpt from a song. "I Know I've Been Changed."

boss say i birthd twenty field hands.
then givd me fifty dollars for fannie.
done promise this last one to god.
dream i givd her to the priest.
took her behind the holy of holies,
came out full grown and singn glory.
shook me woke. knowd i been changd.

Those last lines, "knowd i been changed," allude to the old spiritual "I Know I've Been Changed."

from traditional song "I Know I've Been Changed."

That song is actually familiar in many black church communities across the country. And more importantly than the song, Treasure's emphasis on certain words, her voice modulations, and her rhythms have a long history in those communities and in black musical discourses as well.

Listening to Treasure's accent as she talks and reads before and after the song, however, confirms her Southern roots.

By writing kwansabas in the voice of Fannie Lou Hamer and Hamer's mother and then performing those poems in St. Louis, Treasure is doing more than simply presenting a history of Hamer for modern audiences. Instead, she's participating in that long and apparently ongoing process of moving cultural features of the black South to the Midwest.

I imagine that Treasure's relocation to the Midwest a couple of years ago have been crucial to defining the nature of her reflections on the Hamer and the South. That is to say, I think that these poems about a civil rights worker from Mississippi by a poet from Mississippi are produced the way they are produced, in part at least, because Treasure no longer lives in Mississippi. (Admittedly, I'm still working on my ideas about this point).

It is notable that kwansabas, the poetic form that Treasure uses for her Hamer poems, were created by her father in East St. Louis. So it's interesting to consider that a poet from Mississippi by way of Tennessee moves to the East St. Louis and then St. Louis and begins developing a poetic project based on poetic form first developed in this region.

Transplants from different and distant places can make important marks on their new environments. Here at my university, SIUE, large numbers of black students are from Chicago. There impact on the cultural life, especially the African American cultural life, of the university is undeniable.

There's a long, documented history of blues and jazz artists transporting aspects of their cultural backgrounds across the country as they moved from the South and Midwest to larger cities like Chicago and New York. Among the most well known examples would be Miles Davis. The early ideas and lessons that Davis acquired in East St. Louis were foundational elements for the magnificent body of work he would produce in New York City and other places around the world.

When I listened to Treasure performing back in February in St. Louis, I heard, among other things, a poet from the South. Redmond's notion of Arkansippi suggests that folks from Arkansas and Mississippi have brought cultural ideas and practices to the region for quite some time.

Perhaps those of us who think and write about poetry might consider doing more to document how the migration patterns of writers ends up contributing to the artistic life of a particular region.