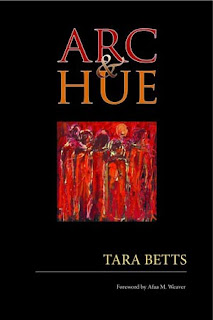 Tara Betts’s volume Arc & Hue rhythmically and thematically explores life in its varied experiences and personal struggles. Betts creatively portrays the tensions of negotiating the world and forging an identity. In a society in which skin color continues to determine perception, Betts reveals the feeling of betrayal of white people who mistakenly take the speaker as one of them, black people who envy her light skin and isolate her, and the painful knowledge that a mixed race woman can never fully satisfy all the expectations from distinct racial groups.

In Betts’s “What It’s Like to Be a Mixed Girl (For those of You Who Aren’t),” the speaker reveals the struggles of a girl who is “torn between tragic paths.” Other girls do not accept her because they “see / stuck up high yellow bitch / stamped on your breath,” while men pursue her because “damn I thought you was white / then asking for your number.” The speaker’s light skin is considered beautiful or preferable; however, this does not inspire the love or adoration of her peers. Rather, it alienates her as she is devalued by envious women and valued by men only for her association with white skin.

She cannot embrace being white, or attempt to “pass,” because then “waking up your voice reminds you / You’re Black.” Because our society still regularly presents blackness as a problem or negative especially in comparison to whiteness, the speaker finds herself in difficult positions and left to create her own sense of identity that defies the confusion and troubled misperceptions of her world.