A Writer-Reader on James Baldwin 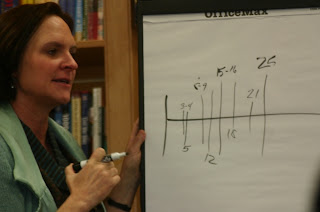 Nelson is an accomplished writer, and her discussion of craft yesterday at the SIUE bookstore indicated that she’s also an engaging and talented teacher as well. Her main focus was on 10 stages of revisions that she encourages students in her fiction classes to perform on drafts of their stories during the course of a semester

At one point during the talk, she was explaining “escalation” and story arcs and mentioned Baldwin’s “Sonny’s Blues” as an example. Nelson mentioned how beginning with a whistle early on in the story, there’s this subtle and increasing buildup of sounds and music until the climatic scene toward the end where Sonny and the musicians let loose in a powerful jazz tune.

Nelson said that the accumulation of sounds from the whistle to the jazz performance in Baldwin’s story could be read as a kind of history of black music in America.

Here’s Baldwin’s narrator early in "Sonny's Blues" describing that whistle: "One boy was whistling a tune, at once very complicated and very simple, it seemed to be pouring out of him as though he were a bird, and it sounded very cool and moving through harsh, bright air, only just holding its own through all those other sounds."

And here’s the narrator reflecting on that force of Sonny’s playing: “Freedom lurked around us and I understood, at last, that he could help us to be free if we would listen, that he would never be free until we did.”

Nelson referred to herself as a “writer-reader.” As such, she looks at stories, attentive to the ways that a writer might when writing and revising in order to arrive at the completed product. I’m probably using operating as a reader-teacher-writer, but Nelson provided me with some more options, including that “writer-reader” perspective.

I had all these wonderful questions moving around in my head concerning various African American authors that I wanted to get Nelson’s thoughts on relating to revision and writer-reader perspectives. But (sigh) when I bumped into Nelson later in the hallway, I froze up and could only ask a simple “ummm, so what else do you read?” I’ll unfreeze and do better next time.

By the way and in closing, with all its renovations and everything, SIUE’s bookstore, where Nelson’s talk was held, has become an important intellectual and cultural space, especially for the writer-reader-listener-scholar types. Folks in the English Department’s Creative Writing program have really been putting the space to good use.
Posted by H. Rambsy at 10:00 AM