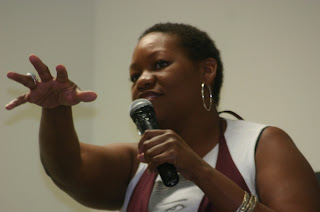 At the risk of over-simplifying things, let me start with this: Treasure Williams has this big, powerful poetic voice—a voice too rambunctious to fit neatly on the pages of conventional American literature; a voice too unruly to sit quietly on a single pew in any static conception of black discourse. Treasure, who was the featured poet at a reading in East St. Louis hosted by the EBR Writers Club earlier this week, has a reading/delivery style that provides some useful ways for thinking about the sonic possibilities of black literary art.

Treasure read several poems and shared her thinking on her approaches to writing. Her poems touched on a range of topics such as family, the after-effects of Hurricane Katrina, southern black women, and relationships. The poems were funny and sarcastic, militant, sad, empowering, and resonating.

Since Treasure moved to the Midwest, she and I talk now and then, and interestingly enough, her regular speaking voice had somehow caused me to almost…almost forget about the force and versatility of her performance voice, the presence of her stage presence, so to speak.

During the course of her reading, Treasure mixed in the blues and black church music, different versions of southern folk talk, and a style that we might generally refer to as “black proper speech.” She even inserted tingles of field hollers here and there in some of the poems she presented. It was a really wonderful listening experience.

Here's Treasure singing a portion of "Wade in the Water" at the beginning of her poem "Her Name is Antoinette Legeaux."

In some ways, her delivery style aligns with a few notable poets of her generation including Tyehimba Jess, Tracie Morris, and Patricia Smith. Like those poets, Treasure has developed a really vibrant performance intelligence. The southern features of Treasure’s presentation style, however, give her work a distinct sound and feel.

Here's an excerpt of Treasure reading her poem "My South," which presents her home state of Mississippi as a person with multiple, contrasting identities.


As someone who’s interested in persona poems where poets take on the voices of others, I was especially interested with how Treasure continually emulated the voices of people and characters she presented in her poems as well as in the stories that she was telling between reading individual poems. She slipped into multiple southern accents, making distinctions between speakers from Mississippi and Louisiana. So in addition to projecting her own poetic voice, Treasure has become this repository of several black women's voices.


Recordings © Treasure Williams. Presented with the author's permission.
Posted by H. Rambsy at 8:59 AM

Treasure the Treasure; I met Treasure at a time when I was trying to be entertained in the ways of my youth. Poetry sessions by the fires of racial rebellion of the '60s. I knew that my people still wrote poetry but in 2003 I didn't know where to find the one's who took it to the stage, for in growing into my life I had misplaced most of my youthful connections. Then that night in some nondescript coffee bar or something, Treasure Williams took the stage and literally punched me in my gut with a force that is best left unspoken! She cut through so many stereo-types of women, men in relationships, children, slobs, bobs and fakers, I was totally amazed! Treasure is a most dynamic of wordsmiths. She pours heart, body, mind and soul into verse and delivered like FedEx never ever can. Thanks for the re-intro and looking forward to communicating with her soon!

Wow! Truly God has created a powerful woman of many talents. I enjoyed the excerpts and the write up as well. Keep moving forward my sistah!!!

THIS WAS AMAZING. I HAVE HEARD TREASURE BEFORE AND THE "SONIC VOICE" IS RIGHT ON TARGET!! HEARING HER SING/READ PULLED ME BACK INTO THAT SPACE I RECALL WHEN FIRST HEARING HER. I HOPE WE CAN MOVE HER AROUND THE MIDWEST SOME MORE!! THERE'S MORE OF MISSISSIPPI IN THESE PARTS THAN WE REALIZE. THE QUALITY OF THE SOUND --SHARP AS A BELL. KUDOS TO SIUE FOR THIS GREAT WAY OF SHARING A REMARKABLE TALENT.