The Profound Intellect of Lucille Clifton 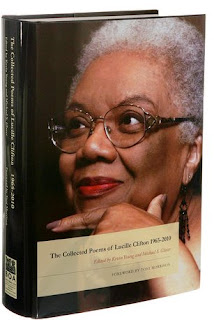 In the "Foreword" to The Collected Poems of Lucille Clifton, 1965 - 2010 (2012) edited by Kevin Young and Michael S. Glaser, Toni Morrison makes a case for more acknowledgement of the intellect of Clifton based on her poetry. Morrison notes that "poets and critics" have offered considerable complimentary praise for Clifton, including "her courage, vision, joy." Morrison notes that she does "not disagree with these judgements." However:


I am startled by the silence in these interpretations of her work. There are no references to her intellect, imagination, scholarship or her risk-taking manipulation of language. To me she is not the big mama/big sister of racial reassurance and self-empowerment. I read her skill as that emanating from an astute, profound intellect--characteristics mostly absent from her reviews. The personal courage of the woman cannot be gainsaid, but it should not function as a substitute for piercing insight and bracing intelligence.

As Morrison suggests, you do not have to go far to find people who love Lucille Clifton. However, finding commentary on her "profound intellect" is a harder task.

For some reason, the words "intellect" and even "imagination" are in short supply in discussions of African American poetry and perhaps even poetry in general. The intellect and imagination are present in the poems, but those types of descriptions are not so prominent.

Morrison's resistance to Clifton as a "big mama...of racial reassurance and self-empowerment" carries some biting humor. At the same time, the comment takes a subtle dig at large swaths of supporters for Clifton, Maya Angelou, and also Morrison, all of whom have been sometimes presented, unknowingly by their fans perhaps, as big mamas of African American literature (To be fair, Angelou maybe nurtures that role at times since she describes Oprah Winfrey and others as "daughters"). Further, the gendered nature of the "big mama" role for black women writers becomes apparent when we consider that Clifton's contemporaries, like Ishmael Reed and Amiri Baraka, have no equivalent designation.

A challenge or opportunity moving forward will involve figuring out ways to highlight the profound intellects and imaginations of of poets whose works display those characteristics.
Posted by H. Rambsy at 1:37 PM