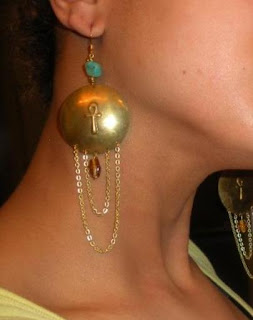 For a few years now, I have interviewed African American college students about their style and fashion choices. Whenever I asked about driving forces for their interests, the most common replies involved the word "different." Whether I talked to people about hair, earrings, hats, shoes, finger nails, or makeup, "different" kept coming up in the conversations.

Folks often indicated that being the same was considered a problem and undesirable. The long and often painful history of black people being viewed as "all the same" may be one reason so many African Americans expressed a fondness for difference. Being different, so it seems, frees people from the apparent confines of sameness.

The diverse ways that people I communicated with sought to achieve difference was especially fascinating to me. When some young women did the "big chop" of their hair in their "natural" hair journeys, they often made decisions about other ways to accessorize. One young woman I spoke with decided to enrich her earring collection, and another woman sought to deepen her interest in makeup. Earrings and makeup later became their methods of differentiating themselves beyond their naturals.

One of the young men I spoke with has an extensive collection of hats. He has amassed approximately 75 caps as one way of being different, but recognizing that others might have some hats similar to his, he also accessorizes each hat with at least one button to further differentiate his looks. The acquisition of many hats and then the added step of personalizing each one allows him to move further and further from the category of sameness.

Most of us are likely unaware of the detailed differences put forth in the style choices exhibited by many of the people we encounter each day. But for those with deep interests in fashion and styling, there's a sense of self-satisfaction associated with subtle shifts and even minute accessories. For them, style was a matter of achieving difference, even if others did not fully recognize what they were seeing.

Related post: A Notebook on style
Posted by H. Rambsy at 7:11 AM