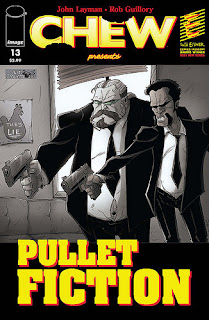 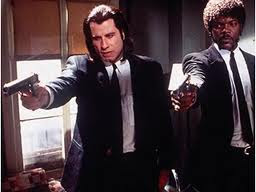 Yesterday, I got the chance to give a presentation at the NEH Summer Institute on Contemporary African American Literature at Pennsylvania State University on comic books, and I decided to give extended attention to one of my favorite artists, Rob Guillory--the artist for the popular comic book Chew. For my presentation, I discussed Guillory's "Easter Eggs" (those hidden visual jokes), which I wrote about here as well. However, even beyond the background, subtle jokes, you see Guillory doing a lot of playful allusions and signifying up front on the covers.

For the Chew #13 cover, Guillory did a spoof on a scene from Quentin Tarantino's Pulp Fiction. What makes the cover especially funny is that Guillory's design of Chew character Caesar Valenzano is already a nod to Jules Winnfield (Samuel Jackson). Guillory slightly changed the hair of character Mason Savoy to make him look closer to Vincent Vega (John Travolta). 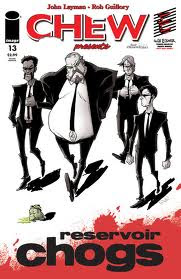 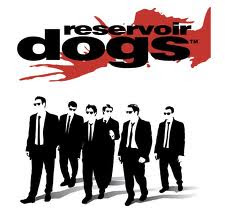 Chew #13 was so popular, due in no small part I'm sure to its "Pullet Fiction" cover, that it sold out. In later reprints, Guillory produced another allusion to Tarantino's work by offering a visual allusion to Reservoir Dogs with the "Reservoir Chogs" image. Guillory's puns on pop culture imagery are amusing and evidence of an artist with an expanded visual vocabulary.