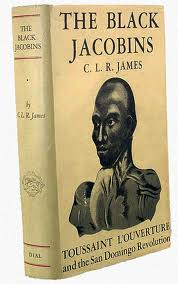 One of the things I like about those reading lists presented on the Public Archive is that they remind of those other offline public archives from years ago. I'm thinking about those unofficial or underground reading lists that contained a whole host of titles by scholars well-known and less so by mainstream scholars.

DuBois was on those lists, but so was Carter G. Woodson.  There was David Walker and Ida B. Wells. John Henrik Clarke and C. L. R. James. In fact, when I noticed James's The Black Jacobins on the Public Archive's recent list, that's when I remembered those lists, books, and discussions floating around back in the day.

James's work was important because he charted a notable black revolution--always a popular topic among street scholars. Not surprisingly, Malcolm's speeches (tape recordings and the books) were also on those lists, and guys were often discussing them. I admit, looking back, that many of those underground reading groups that I was aware of back in the day were largely comprised of young men. Not enough of the titles included work by and about black women, nor were there considerable volumes of poetry and works of fiction on the lists.

Notwithstanding those limitations, I felt those networks of readers and active thinkers participating in what we in the academy refer to as "black studies" were still invaluable sites for the accumulation and production of knowledge. A lot of the guys I encountered were not interested in pursuing careers as university professors; instead, they read and studied hard for the sake of being or becoming conscious.

Being conscious meant you could critique the historic roots of anti-black racism; acknowledge the achievements of black Americans and Africans whose names were not mentioned in official academic settings; converse with like-minded conscious folks; and develop a greater sense of self worth. You could have long extended conversations about "our people." You could offer your thoughts on a topic and receive compliments for being "deep."

Was some of this stuff idealistic and romantic? Yeah, of course. But so what? Those underground public archives and reading groups served the important tasks of getting and keeping folks sharp--folks who were often under-served by their formal schooling. It inclined them to become educated in diverse ways, acquire broad bodies of knowledge, and pass it on.