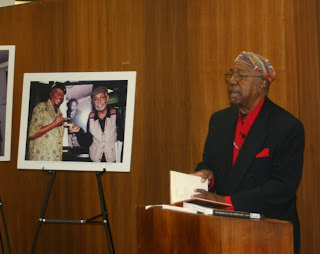 This past Thursday, Nov. 17, we worked with Lydia Jackson and the folks at Lovejoy Library to organize a poetry reading featuring Eugene B. Redmond. He gave a really outstanding "reading" that included chants, call and response, songified phrasings, dance movements, and narratives about cultural history in East St. Louis.

I've seen Redmond give several readings over the years. This was one of his best.

Redmond read his poem "Funky-Grace," a piece by Henry Dumas, a section from his epic East St. Louis poem, a poem "Moody Maya Kwansaba," and a few other pieces. In between the poems, he weaved in reflections on his work with black studies, East St. Louis history, and participation in artistic activities over the years.

There was a large turn-out of faculty, administrators, and library staff at the event, and I was especially pleased that so many of the folks from my African American literature course were there. A few of the people in my crew from East St. Louis let me know after the event that Redmond had made them aware of aspects of their city that they had never known.

"This was a history," lesson said one of the guys from my class.

"We need to get more people dropping knowledge like this at the school," said another young man. "We never hear that much about East St. Louis."

The idea of a history lesson and a poet "dropping knowledge" were useful descriptions of Redmond's reading by the young brothers, both of whom are from East St. Louis. Their descriptions and enthusiasm spoke to the degrees to which Redmond's presenting was at once a poetry reading and at the same time something more.

Related content: Eugene B. Redmond and the EBR Collection

Your summary really made me wish I had been able to make it to the reading. EBR is such a treasure (I know I'm biased:), but I really do believe that many more academic opportunies are possible via my dad's work/experiences. Brava to you for your important work as an educator and neo bam archivist:)

It was a privilege to hear Dr. Redmond read/perform his poetry. He was totally in charge of the room, bringing the whole audience along to participate and learn. But his sense of humor made it all seem easy and relaxed too. It really was a great experience, he's an extraordinary man.