In chapter 1 of Body and Soul, Alondra Nelson surveys the extensive histories concerning how African American responded to medical discrimination prior to the mid-1960s when the Black Panther Party was formed. The chapter clarifies the roots of the Party's activism.  Nelson charts the "little-known yet extensive history of African American health-focused activism as necessary context for understanding the Black Panthers' health politics" (24).

Later she notes that "although physicians and race leaders often served as figureheads and visionaries, efforts to provide healthcare services were often funded and administered by dedicated laypeople working to improve the welfare of their communities." Club women, community organizers, and churchgoers were some of those laypeople who "played a crucial role in devising ways to stretch their communities' professional resources and in confronting health inequality" (27).

I was intrigued by the discussion of Booker T. Washington's and Marcus Garvey's involvement in African American health activism. In March 1915, months before his death in November of that year, Washington "initiated National Negro Health Week," a set of programs that over the years "inspired health consciousness in black Americans, built a national infrastructure of health education, and coordinated local initiatives into a large-scale, nationwide campaign" (28).

Although Washington the historical and political figure is often viewed as an "accommodationist for his less-than-radical approach to segregation," Nelson notes that "Washington the health activist was, if not an integrationist, certainly an antisegregationist" (30). 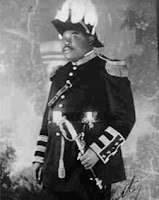 Garvey and his University Negro Improvement Association (UNIA), too, had a hand in past health activism efforts. The UNIA included a "battery of paramedicals" known as the Black Cross Nurses (BCN). In 1920, at a UNIA conference that drew over 25,000 of its members, Garvey's group developed a "Declaration of Rights of the Negro Peoples of the World." The document included a statement related to black health activism that "joined the problem of a racial discrimination in the medical professions to the issue of racism as an 'impediment' to black health to a more general concern with social justice" (31).

Washington and Garvey often come up in the courses I teach. Body and Soul has given me new material to present on these figures and the roles they played in health activism.

Related: URG: Notebook on Alondra Nelson's Body and Soul
Posted by H. Rambsy at 9:15 AM