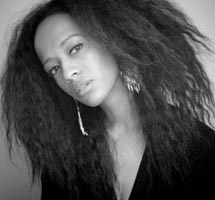 For some reason, I have a hard time pinpointing exactly when I first became aware of the work of Rachel Eliza Griffiths.

My problem remembering--you know, aside from my typical memory deficits--is because I encountered Griffiths's work in a few different moments, and it just so happens that some of those times, I wasn't fully aware that I was witnessing her work. Griffiths is a photographer, and poets are some of her favored subjects.

At some point, I started recognizing that she was the photographer of many striking images of writers that I had seen on the backs of books or online. Back in October 2010, I recall someone on facebook linking to Griffiths's wonderful photographic coverage of the "73 Poets for 73 Years: Lucille Clifton Tribute" at James Madison University.

I would reference those photos to various people, and more than once, I'd hear the statement "And she's a poet." Of course, when I'd open discussions with various other folks mentioning Rachel Eliza Griffiths the poet, the response I would get would be, "And she's a photographer."

So-far, the poet-photographer I've studied most has been Eugene B. Redmond, whose massive collection of thousands and thousands of images featuring black writers and cultural figures has given me quite a bit to consider. Griffiths represents a new generation in the artist as cultural historian continuum. Among other things, what that means in the case of Griffiths is that we'll likely see her participating in the production of a variety of visual technologies, as we witnessed a couple of months ago when she released a trailer on youtube for her volume Mule & Pear.