Sweat the Technique: Preserving the Legacy of the Katherine Dunham Technique 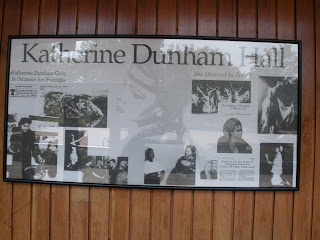 This past summer, I participated in the 28th Annual Katherine Dunham Technique Seminar (July 23-July 30, 2011) here on the campus of SIUE. Most of the classes were held in Dunham Hall, which houses several classrooms and studios, but the most important features of this building are its name and the Dunham Hall Theater, in honor of the world-renowned anthropologist/choreographer Katherine Dunham.

One of the esteemed visitors was the daughter of Katherine Dunham (and John Pratt), Marie-Christine Dunham Pratt. Her message was simple and lucid: “The Dunham Technique is in danger” of being a lost form (hereafter referenced as KDT). Some of the criticisms of KDT are that it is dangerous and plagiaristic. One cannot argue against the fact that Dunham pulled from various cultures, but she saw dance as intercultural and dance was a way to say that black people are beautiful because people are beautiful.

Her history and legacy are reasons why trained dancers, historians, scholars, and lovers of Dunham gather annually from various parts of the country and world. At the beginning of each annual seminar, a KDT Certification workshop is held. Those who wish to teach and preserve the KDT should and must become certified to do so. “It is a process,” as Dr. Albirda Rose stated during a workshop. This “process” she refers to, however, is not one people should be alarmed by, but it is necessary to have an understanding of and willingness to learn Dunham’s lifework (technique, choreography, and pedagogy), which is multi-layered and beyond the spectrum of dance.

Moreover, it carries with it a holistic aspect of life. It’s intellectual, fun, spiritual, healthy, sweaty, and a lot of work. How you do a dance is just as integral to why you dance. Ruby Streate stated that “In Dunham Technique you dance barefoot, so that your feet are connected to the earth.” Each warm-up session is in-sync with the beat of the drums. We began with breathing exercises and body movements. As we progressed, we went into isolation movements of the head, neck, pelvic muscles, and even the batting of our eyes. What I learned by participating is the body’s core and isolations are essential in communicating a polyrhythmic body because of the polyrhythmic nature of African rhythms.

This year’s theme was Haitian and Cuban influences in KDT. The confluence of energy between drummer and dancer, rhythm and movement, was constant and reciprocal. During my first percussion class, we were taught the Conga technique, which deals with a precise arrangement of the hand and fingers as they hit a certain part of the Conga drum, which is called song (edge), base (center), and variation (rim). 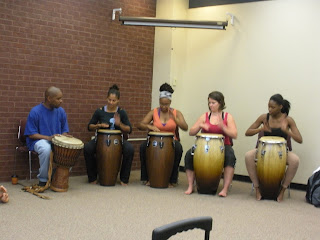 Dance and cultural studies scholar Dr. Halifu Osumare presented a two-part lecture and film series on the theories and philosophy of Katherine Dunham. She and one of the seminar participants, dancer Eyla Moore, demonstrated a portion of the Yanvalou as it relates to Dunham’s theory of form and function in the cultural and social context of dance. From the Dunham Repertoire, we danced the Rara Tonga and the (Haitian) Merengue. I was excited, but not at all surprised to find that several of the dance steps that we did were similar to the dance movements in Zumba dance fitness.

For more information on Dunham Technique in the St. Louis and Metro East area at, visit the Katherine Dunham site o The City Studio


For more information on bringing a Dunham master class to an area near you, email: KDmasterclass11@gmail.com

*********
Danielle Hall is a Spoken Word poet from St. Louis, Missouri, and a second-year graduate student in the department of history at Southern Illinois University Edwardsville, where she also serves as a program coordinator for the Black Studies Program and as a Fellow for the Eugene B. Redmond Collection. She writes about black women intellectuals, movements in black political and cultural history, and African American poets and film studies. This summer, she participated in the Furious Flower Poetry Center Seminar on Sonia Sanchez at James Madison University and the 28th Annual International Katherine Dunham Technique Seminar.
Posted by H. Rambsy at 4:41 PM