Memorizing Phillis Wheatley's "On Being Brought from Africa to America" 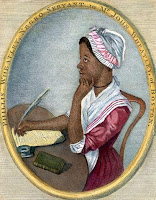 Last week during the time that I was memorizing Robert Hayden's "Frederick Douglass," I decided that I wanted to start carrying Phillis Wheatley's poem "On Being Brought from Africa to America" in my memory as well.

It's a short, fairly easy poem to memorize, but I still needed to read it while adding images in my mind to correspond to a few words and phrases from the poem. Doing so makes that poem, and any poem really, easier to remember and categorize.

Assigning my own sets of mental images to Wheatley's words also allows me to personalize the poem in my head and give the piece a life in my imagination that it might not have on the printed page. If that makes sense.

Well, I should speak with more humility when I saw I know those poems. There are times when I recite them and get a couple of words and phrases off. It's going to take some time before I can fully absorb the pieces.

But Wheatley's poem and Tyehimba Jess's "1912" are different. I know them with confidence. Both pieces, which are very different kinds of poems by the way, are somehow firmly rooted in my mind.
Posted by H. Rambsy at 6:40 AM