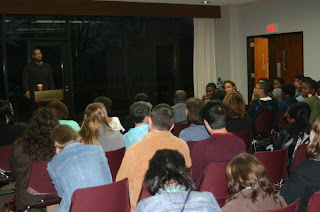 TNC leading Q & A during presentation at SIUE

Last week's visit and presentation by Ta-Nehisi Coates (TNC), a senior editor and blogger for The Atlantic magazine, was an important moment in the ongoing history of Black Studies @ SIUE. Coates's visit gave us an opportunity to interact with an accomplished writer and a significant black public thinker.

During his talk, Coates described himself as a "Civil War nerd" and discussed his experiences visiting battle sites across the South. He explained that he became more and more interested in the Civil War when he discovered how little he knew about this monumental event (or series of events) in American history.

TNC told the story of Andrew Jackson Smith, who was born a slave. When Smith learned that he might be forced to  assist his master who joined the Confederacy, Smith fled and joined the Union forces. He participated in the Battle of Shiloh in Tennessee and the Battle of Honey Hill in South Carolina. In 1916, Smith was nominated to receive the Medal of Honor, but the award was not granted during his lifetime.  In 2001, President Bill Clinton presented the Medal to Smith's descendants.

Learning more about figures like Smith, the Civil War, and why black people are absent from historical sites like Shiloh has motivated Coates to spend considerable energies reading, thinking, and writing about the War. Listening to him discuss his interest in the Civil War really captivated.

Modesty probably prevented Coates from saying what those of us who follow his blog know. He's far more than a nerd of the Civil War; for more than two years now, he has produced a tremendous body of writings concerning soldiers, historical figures, battles, and modern-day issues related to the War.

The Coates talk gave us an opportunity to bring a wide range of folks connected to our Black Studies Program together for a common event. Two months before the talk, members of our crew began reading and discussing TNC's memoir The Beautiful Struggle. I complemented those discussions by publishing several entries related to Coates's writings.

Next year, we will organize several black studies activities under the theme "building consciousness," as we encourage program participants to become more active in their pursuits learning about African American history and culture. In many respects, Coates's talk and our efforts to promote his visit constituted a building consciousness preview.

Associate Dean Larry LaFond and Arts and Issues Director Grant Andree took the lead on bringing Coates to campus when they selected him as a keynote speaker as part of the university's spring colloquium "Thinking About America." It was notable and admirable that LaFond selected a keynote speaker, who among other things addresses black history and ideas in his work.
Posted by H. Rambsy at 11:26 AM