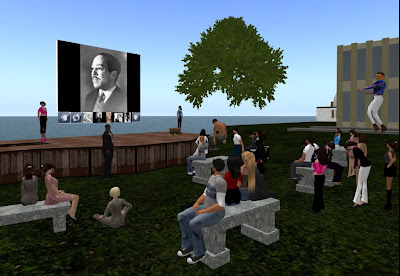 I’ve always thought of those folks who began organizing what eventually became known as black studies as exceptionally imaginative and even visionary. So I wonder if they could’ve imagined a scenario like the one presented in the image pictured above--a class on Langston Hughes taking place in a virtual world.

The image is a snapshot from an African American literature course taught by Bryan Carter that I was sitting in on during the course of this past spring semester. I attended a presentation by Professor Carter and his avatar back in December, and he invited me to sit in on his classes, many of which he teaches online.

Professor Carter utilizes a range of new media and technologies such as live, online broadcasts, chat rooms, blogs, voice threads, and Second Life. I took the snapshot pictured above on Second Life during one of Carter’s discussions of Hughes for his African American literature course.