Project on the History of Black Writing

[Notes from a presentation I made today at the Modern Language Association conference in Philadelphia, PA for the panel "Digital Scholarship and African American Humanities," ultimately organized by Anna Everett.]


When it comes to Digital Scholarship and African American traditions, the Project on the History of Black Writing (HBW) has been a really important site of possibility. What Maryemma Graham, the project's founder, and her contributors have done, for more than 25 years now, has been to utilize a variety of new and old media in order to present, preserve, and promote historical black literary texts. 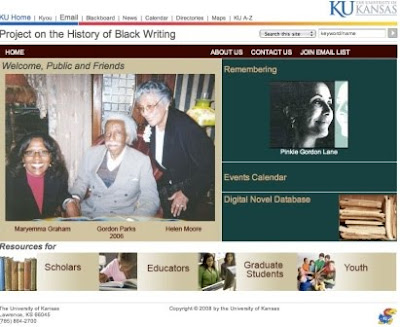 (a screen shot of the HBW webpage)

These days, given the wide availability of black writings on the internet, it's easy to underestimate the value and ambition of a project like HBW. Early on, the project was known as the Afro-American Novel Project, and the plan was to develop a comprehensive bibliography of largely neglected and out of print novels. As noted on the project website, "The principal component of the HBW is its manuscript collection, which includes photographic copies of 480 texts dating from 1861 to the present, a growing archive of rare books, and more than 100 rare 20th-century journals."

A signal move for HBW's collection has been the gradual shift over the years from conventional bibliographies and databases to a fuller range of electronic digital media. And so what kind of possibilities become available when we digitize extensive bibliographies of black literary history? To what ends should be representing African American materials on the web and in other new media formats?

For now, what I've learned from many of Professor Graham's outreach projects is that advocacy and collaborative works must be central to the development of far-reaching African American literary and public literacy projects, especially when those projects involve bringing largely neglected texts and authors to the attention of folks within and beyond the academy.
Posted by H. Rambsy at 2:23 PM