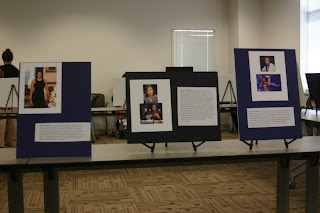 Valerie Jarrett and Angela Davis. Ursula Burns and Serena Williams. Condoleezza Rice and bell hooks. Toni Morrison and Beyoncé Knowles. Who fits the category of politically inspiring black women? How do some African American writers, entertainers, politicians, and athletes incline us to reconsider normative definitions of what it means to be political or inspiring? Participants in the SIUE Black Studies Program have been posing those kinds of questions for some time now.

Our questions and conversations led to our mini-exhibit yesterday entitled "Politically Inspiring Black Women" an event targeted at a group of young women enrolled in an orientation course here at SIUE. One of our long-time and leading contributors Shelley Houk also invited students from her Women's Studies class, a large number of whom attended.

Our small exhibit featured 28 political or inspiring black women. The exhibit sought to extend our broader conversation about African American ideas, racial equity, and interactive learning activities. But we also wanted to take a more concerted effort to highlight the presence of black women in discourses of politics and empowerment, both broadly defined.

The audience response was really positive, but what impressed me most was the design and contributions to the project. Adrienne and Djamilia handled the composition and arrangement of our display panels and the selection of the images. Our regular contributors collaborated on the 28 biographical sketches.

And our man Henders 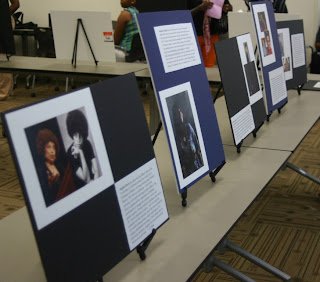 on produced a really captivating audio track that included excerpts of the featured women speaking with a variety of soundtracks beneath their voices. To hear those voices and see those images in that space was a moving, if not empowering, moment.

Oh, and we didn't stop there.

We reached out to about a dozen faculty and graduate students and asked them to comment on the benefits of being intellectually engaged, remaining artistically involved, taking on leadership roles, or traveling. Their responses were organized into personalized letters to the young women from the orientation course.

So all in all, I was quite pleased that we coordinated an event for black women, and the event ended up attracting a notably multi-racial group of women...and men. The event was also really satisfying in that we had more than 20 black studies contributors, faculty, and graduate students contribute to the overall production.
Posted by H. Rambsy at 6:44 AM