This Douglass, This Determination 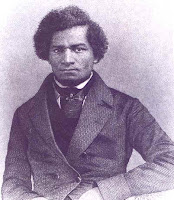 In his poem Frederick Douglass, Robert Hayden writes that when our freedom is "finally won" then "this man, this Douglass, this former slave...shall be remembered." According to Hayden, Douglass will be remembered most "with the lives grown out of his life," which will materialize and extend the ex-slave's dreams of liberation.

The young men and women participating in our Summer Reading Project are concluding Douglass's Narrative over the next week or so, and they will likely have their own memories of this Douglass and the process of tracing the account of his life. They have expressed a number of overlapping and divergent ideas in their correspondences with me about Douglass's book.

One student wrote that Douglass's "drive and his willpower" as his most notable quality, and another observed that Douglass's tendency to be "head strong" was what stood out. Many of the readers identified Douglass's "determination" as his most enduring quality. A couple of students mentioned Douglass's "meekness" and his ability to seem "nonchalant," even though he had encountered so many hardships, as his more noticeable characteristics.

The recurring favorable comments I have received about Douglass's drive and determination from the participating students indicates that they view this quality as Douglass's most commendable and outstanding.

But what makes determined and driven historical figures like a Frederick Douglass so appealing to us? And at what point does the favorable determined risk becoming the negative single-minded or hard-headed?

In the coming months, we'll have more extended conversations about what a concept like "determination" and a figure like "this Douglass" really means to us. I'm looking forward to the new ideas we might uncover.
Posted by H. Rambsy at 12:07 PM