The Future of Black Reading 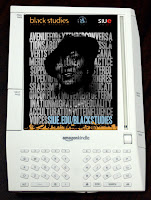 What would it be like for a group of students to read Frederick Douglass’s slave narrative using an electronic book reader? How about using an e-book reader to cover Toni Morrison’s Song of Solomon? Or, what would the experience be like of receiving short poems by Langston Hughes and Gwendolyn Brooks via text message?

I began posing these kinds of questions with more interest when Amazon released its e-book reader the Kindle. The Kindle's launch a year ago generated a wide range of publicity. Some viewed the device with suspicion, but an overwhelming number of reviewers predicted that the Kindle and e-book reading devices in general would become increasingly sophisticated and eventually change the nature of reading and book publishing.

Among the dozens of reviews I covered, I was especially interested in E-Book Readers: Ready for Their Closeup? by poet, literary critic, and blogger Aldon Nielsen, whose piece pointed out pluses and minuses with the Kindle and Sony’s e-book reader. Nielsen’s review did not focus directly on e-book readers and black books.

Recently, NYTimes writer Motoko Rich published two articles for a series entitled “the Future of Reading” that concentrate on how “the Internet and other technological and social forces are changing the way people read.” The tones of the comments in response to Rich’s Literacy Debate: Online, R U Really Reading and Using Video Games as Bait to Hook Readers indicated that a wide range of readers have strong opinions about the convergence of new technologies and reading. 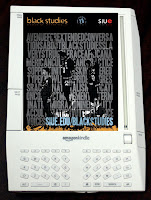 There’s been little discussion about what the future of African American reading practices might entail in the mainstream venues, not unless you're counting Oprah's recent endorsement of the Kindle. Still, we have to wonder, to remix the focus of that series for the NYTimes, how are technological and social forces changing the ways black people read and shaping an array of readers' encounters with African American literature?

We’ve been trying to address those kinds of questions with some of our projects such as The Interactive Reading Group and aspects of the Poetry Correspondence Program. We’re still in the early stages of researching.

If you have any thoughts or links on the future of black reading, do let us know.
Posted by H. Rambsy at 8:45 AM

An interesting article by Knight, Dixon, Norton and Bentley in The Urban Review June 2004 suggests some ways we need to consider the impact of new technologies on instruction. They're speaking specifically about video conferencing, but the questions they raise can (should?) easily be applied to any technology. They argue:

"What difference will the technology make?" demands attention be paid to relationships of power embedded in the ways technologies are used. What difference does the technology make, if Black and Latino/a youth are subjected to the same oppressive pedagogies of traditional classrooms? Who benefits from the ways these technologies are used and who loses when students are conceptualized as active social learners in their own meaningmaking? How do intersecting racial-ethnic, ability, class, gender, and linguistic
differences impact the difference that the technology makes? How are
these differences, in turn, shaped by different literacies or social, cultural, and political communicative and interpretive practices, to impact the difference
that the technology makes? These questions are complex and reveal
that one cannot simply add technologies to classrooms and stir. The use of technologies, literacies, and pedagogies must conjoin and remain in a state
of flux, constantly changing to create more equitable and culturally responsive educational contexts for all youth."

I must admit many of the questions you raise in this post mirrored my thoughts and concerns when the Sony E-book Reader was launched in 2006 and then Amazon's Kindle in 2007. I love my computer and I'm on it all the time, but the thought of reading a literary classic electronically simply did not appeal to me. That is . . . until I tried it. I was given a Kindle as a gift earlier this year and I will admit that I was slow to use it. But when I stopped resisting it and tried it, I now prefer my books in this format! I'm on the go alot and the ease of carrying 20+ titles all at once to read just about anywhere has me re-thinking why I was slow to embrace the idea of reading electronically in the first place. So as more and more books are digitized and made available in electronic format, I believe the future of reading period (not just black reading) in this format is going to be more mainstreamed than we realize.