The Compatibility of Langston Hughes 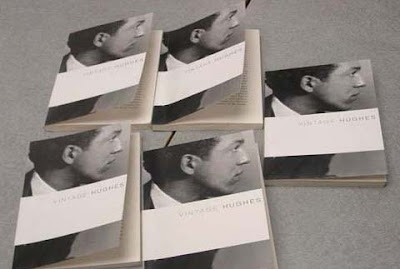 “Reading Hughes, as we discovered throughout his centennial year (2002), is as much a public act as a private one. He appeals to audiences of all generations, races and nations, and interest in his work cuts across socioeconomic lines.” --Maryemma Graham


When the idea of extending our Poetry Correspondence Program and purchasing volumes of poetry for the more than 200 participants emerged, Vintage Hughes came to mind. The decision to focus on Hughes was, in part, a direct result of having been included in a previous project entitled “Speaking of Rivers: Taking Poetry to the People.” That project was created and led a few years ago by literary scholar Maryemma Graham.

“Speaking of Rivers” facilitated discussions of Hughes and other African American writers at 20 different sites nationwide, including at SIUE and in . For many of us interested in developing far-reaching African American literary and humanities projects, Graham has often provided “the” models. So, “Speaking of Rivers” was an excellent case in point for what was possible with Hughes.

But we found Hughes useful for other reasons as well. Our goal of introducing hundreds of middle school and high school students to various ideas through African American poetry meant we needed a writer whose works could serve as a strong foundation and vital connecting point to other poets and writers. We found Hughes’s work quite fitting and compatible.

The general themes Hughes presents—music, family, identity, and race matters—reflect several issues that middle school and high school students frequently struggle with today. And, his use of African American colloquial speech and the rhythms of jazz and blues make his poems entertaining. As a whole, the content and style of his work appeal to an audience of young readers.

Additionally, Hughes's work corresponds to the writings of a range of other writers, including Gwendolyn Brooks, Kevin Young, and Tracie Morris, to name just a few. Ultimately, Hughes made it possible for us to discuss a broad range of artists and ideas in the relative short space of our correspondences with participants.

Along with exposing younger students to new poetry, Hughes's work allowed the college level letter writers to hone their own argumentative and writing skills. While composing the letters, writers had to identify what the most important themes were and highlight those themes to the recipients. Hughes’s verse exemplifies and inspires clear and concise approaches to writing, and his coverage of such a wide range ideas in his poetry empowers our letter writers to be both expansive and accessible.

Overall, Hughes has made it possible for us to meet the needs and interests of a large, diverse group of readers and writers.
Posted by SIUE Black Studies at 7:04 AM