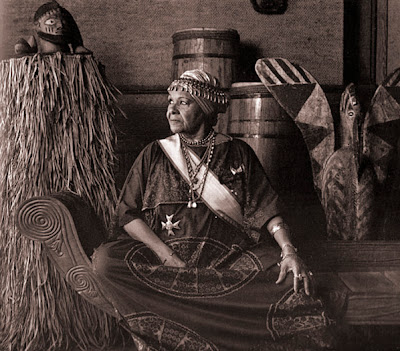 A few weeks ago I was standing in the foyer of the Katherine Dunham Museum in East St. Louis, Illinois, speaking with Natavia Sanders, a Dunham Museum representative, about my research. Our conversation led to an especially shared enthusiasm over Miss Dunham’s contributions and our role in continuing her legacy. In that moment we both agreed that we had somehow been “possessed by Dunham.”

Being possessed by someone or something usually carries a negative connotation or the notion of a dark supernatural presence; however, becoming possessed by Dunham has been a positive experience for me. I recall visiting the Katherine Dunham: Beyond the Dance exhibit at the Missouri History Museum in 2009 and feeling completely enamored by the magnitude of her life and career.

The exhibit included a table where visitors could write a message to Katherine Dunham, and there I sat, inspired, writing a message to Miss Dunham, who had died in 2006. I wrote to her about my visit and thanked her for her contributions and the beautiful legacy she left for us to learn about her life and humanity through the performing and cultural arts. In retrospect, it now seems that this initial “possession” or contact has been a source of guiding light during my grad school journey.

I’ve already concluded that studying Miss Dunham necessarily requires a channeling of her spirit to some degree because of the type of person she was. To be an African American woman and accomplish all that she did in her lifetime speaks volumes. intelligence, courageousness, resilience, and radicalism even. There’s really no way to describe it, but her influence is the type of force that placed me in her museum with an internship this semester.

I’m always moved and sometimes startled by the video footage of one of Miss Dunham’s last public appearances where she spoke to an audience at SIUE in October 2005 and stated “I know I’ll be back and part of the reason I come back is because you all will it, you don’t know it even. You don’t know that you’re bringing me back.” Miss Dunham never returned in the physical sense, but her declaration was her way of affirming that her spirit will live on and continually come back.

In those moments when I’m up late reading, thinking, scribbling notes here and there, practicing Dunham Technique isolations or pining over the meticulous details of her life, I’m always reassured in these moments that being “possessed” by Dunham isn’t so scary after all.

Related: Who's Afraid of Black Women?

*****
Danielle Hall is a program coordinator and contributing writer for Black Studies @ SIUE.