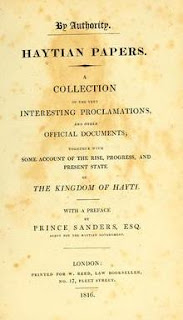 In African American literary studies, searching for literary artifacts includes looking for ‘the big things.’ – first editions to manuscripts, an author’s diary, a ‘lost’ manuscript, a collection of correspondence – and also locating seemingly small (small in physical size, yet potentially vast in value or import) artifacts, like signatures, a table of contents, an author’s or reader’s notes in the margins of an essay, or perhaps an inscribed photograph. While wading through archival materials, I am often searching for one of the larger artifacts in hopes that it leads me to less obvious artifacts.

For example, I am in search of the 2nd edition of Prince Saunders’ Haytian Papers. In 1816, Saunders, an African American man, translated, compiled, and published the Haytian Papers in London. These papers are a collection of late 18th and early 19th century Haitian national documents originally authored by Haitian leaders, Henri Christophe and Toussaint L’Ouverture. The papers also include correspondence between Christophe and L’Ouverture and multiple French military leaders during the Haitian Revolution.

Saunders published the Haytian Papers in a second edition in Boston two years later, in 1818, and went on to promote his publication during a speaking tour in the northern United States. Alas, the ‘big’ artifact I seek is an original version of the 1818 Haytian Papers in the interest of locating much less obvious artifacts within.

I seek out the 1818 Haytian Papers because I am invested in the narrative that the material differences between these two editions have to tell about early Black American nationalisms. I have read a Google Books version of this edition, and yet I am afraid to take this reproduction at face value because I noticed that certain notes and insertions by Saunders himself had been removed from the 1816 version in this later publication. Whether these changes are by Saunders or present-day editors, I cannot be sure.

And so I wonder, could other artifacts, like the image Saunders includes of himself leaning on a pile of books, looking distinguished, and staring directly at his readers, have been removed from the second edition as well? An original version of the 1818 papers would lead us to these artifacts, and it would enable us to make comparisons between the author’s perception of his London audience in 1816 and his US audience in 1818.

I am in search of the original version of the 1818 Haytian Papers because the changes in the materiality of this text when it was meant for the United States may hold answers to the way one prominent Black man understood his community’s interests and needs. This literary artifact and the artifacts embedded within it also provide an opportunity to better understand the ways this particular piece of Black literary nationalism wove its way into Black US national consciousness early in the 19th century.