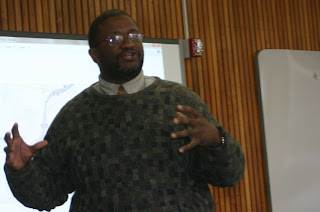 SIUE professor of historical studies Anthony Cheeseboro is writing a book about the history of entertainment in East St. Louis. Yesterday, he gave a short lecture on the progress that he's making on his book.

Cheeseboro's book will actually focus on the greater region, since his study also addresses many of the smaller towns and cities circling East St. Louis. There have been some books about the history of East St. Louis and the region, including SIUE's own Andrew Theising's book Made in USA: East St. Louis (2003). Cheeseboro's focus on the development and then decline of the region's entertainment cultures, though, is really groundbreaking in many ways.

There are some challenges, acknowledged Cheeseboro early in his lecture yesterday, writing a book about the night life of a region that is known these days by some for crime and strip clubs. Writing about these subjects, he pointed out, is view as less serious by some.

Still, listening to Cheeseboro trace out the larger history, no, the larger histories of the region makes it clear that the popular views of East St. Louis and the area often mask all kinds of important factors.

I was especially interested in Cheeseboro's discussion of how fairly close-knit black communities and excellent high school band programs (with band teachers who regularly played gigs at local clubs) played a crucial role in the development of important musicians. Most notably, of course, is Miles Davis, who grew up in East St. Louis.

Those close-knit black communities were partially, if not largely, the results of racial segregation, which often required black people to stay in their place, so to speak. As racial barriers were dismantled and lessened over the years, African Americans had greater access to live in different places, so the location and composition of what was known as "the black community" likely changed.

When Cheeseboro's is written and published, it'll give us a clearer sense of those changes over the years.
Posted by H. Rambsy at 11:15 AM