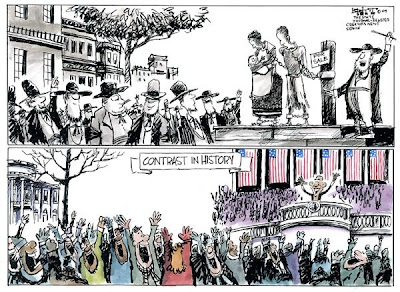 In a single cartoon, Chris Britt presents two separate periods of time, two separate worlds. The top strip depicts what existed in the U.S. before 1865: an auctioning of an African American family, where the public accepted them as property. Then Britt, fast-forwarding to 2009 in his bottom strip, shows Obama at the inauguration where the public today accepts him as their President, cheering. It is a remarkable change in time and, as Britt writes, a “contrast in history.”

The two panels display key differences. In the top panel, the crowd is drawn in simple black and white, which brings to mind the idea of something old-fashioned and distant. By contrast, the bottom panel is full of color variety conveying fresh, immediate, and hopeful feelings. Overall then, black and white and color matter.

The images provide dramatic scenes in the history of race relations in the U.S. African Americans have worked their way through the worst possible situation for at least one to hold the highest governmental position. But, to what extent does Obama’s ascension prompt a reconsideration of the American dream for large numbers of black people? It’s interesting to consider how the image Britt offers coincides with visions about the alleviation of racial tensions.

Chris Britt draws for the State Journal- Register and his work can be seen in other syndications nationwide.